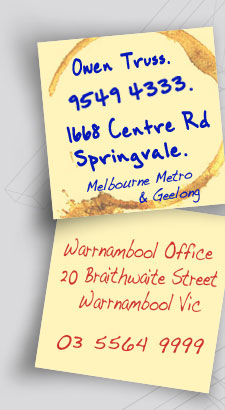 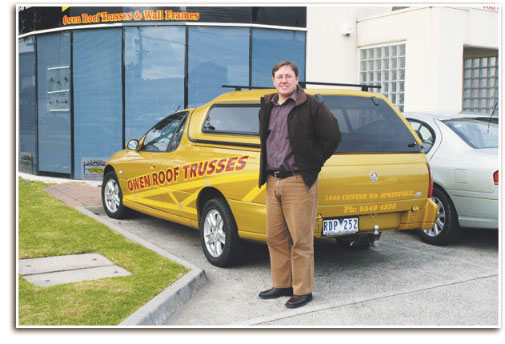 The name Owen is synonymous with machinery within the fabrication sector, and although RJ & JJ Owen Roof Trusses & Wall Frames, a MiTek fabricator, seems to receive less publicity, it is where the roots of the company lie.

The manufacturing side of Owens is based in Warrnambool, about 260 kms from Melbourne on the Great Ocean Road, while the main detailing office is based in Melbourne itself.

Peter Owen runs this side of the operation and informed that they recently relocated to new premises in Springvale to accommodate the expanding business.

“The office space in Dandenong was just too small and things were getting very cramped,” Peter informed, saying they had occupied the original site for around 10 years.

“We’ve now got six people working in our Melbourne office, and are looking for two or three more frame and truss detailers, so we badly needed to get into a bigger office.”

Peter said they also have at their disposal an area of the building that is not being used at the present time by the truss operation. He is considering utilising this large room as a training room/showroom for their builders and customers.

“We get a number of inquiries from our builders to come and look at what are supposed to be problems with trusses. More often than not, the problems can be referred back to installation issues.

“MiTek run a short installation course for builders and supervisors, and we’d like to be able to use them to assist us in helping our builders better understand what they need to do.”

Asked of the type of problems are encountered, Peter said the builder generally just “doesn’t put things in square and plumb.”

“We supply PosiSTRUTS, frames and trusses, and they get installation manuals issued from MiTek.

“These are filed straight way in the bin and with changes in the code and Australian Standards for the Installation of roof trusses and wall frames, the builders just don’t keep up with these changes.

“They don’t put the triple grips where they’re supposed to go, or they don’t put things in plumb straight or square, and often we find that the trusses are dead straight but there’s a hump in the floor.

“This means that the walls aren’t sitting flat on the floor but are coming up to meet the trusses and pushing them out of alignment. About 90 per cent of the problems go back to the footings and slabs.

“There is no other way around it than to go to site and show the builder what the problem is. Of course they usually blame the trusses because our product is the last thing to go up and they may not see the problem till then, the trusses appearing to sag or bow to the naked eye.

“When you run a few string lines, it soon becomes apparent where the problem is.”

Peter said he would like to see his builders receive more training on the proper installation of trusses and frames.

“People would then know where to look if a problem arises. Each time we go out to site its time for us. Sometimes we are sending people out once or twice a week to look at problems that are clearly not related to our business - that can be costly.

“Add travelling time to that if the job is a long way away and the better part of a day is gone. “We’re only looking at the MiTek training as a service to our builders. If they were to employ the services of an engineer to inspect the job, they’d be charged a lot of money – we can’t charge them but we can help them better understand what they’re doing.”

Another issues that has been raised in recent times is the safe loading and unloading of trucks, and falling from heights.

Peter said these issues affect both themselves and their builders, and they are looking at perhaps including OH&S in their training packages.

“We’ve looked closely at OH&S in our plant in Warrnambool and made improvements to avoid problems. We run our own fleet of delivery trucks and we need to get a lot on a truck at times.

“We have a designated loading station fitted with a cable system and an inertia reel that runs the length of the truck so that if anyone slips off the truck, the inertia reel will catch them.

“And the only people allowed in that area are those actually loading the trucks.

“Plus safety jackets must be used. We’ve implemented fines if people walk on site without them.

“We’re also setting up all our documentation and manuals, which we instigated some time ago. Because we manufacture machinery ourselves, this type of documentation is very important.” Speaking on upgrades at the Warrnambool manufacturing operations, Peter said they are currently looking at expanding their wall framing lines.

“At the moment it is estimated that the Victorian construction industry is only using 45–50 per cent wall frames, so that’s the area where we have the most potential to grow.

“The next stage for us is to take our wall framing lines off site and place them in a purpose built factory at a nearby location. That will allow us to redevelop the existing site to better cater for truss fabrication.

“We set up the new office in Springvale with expansion in mind, and we feel we’ve done it right. With computer networks set up and the age of technology expanding at a rapid rate, offices in two locations are easy to work with.

“There is even potential for us to better communicate electronically with our builders and specifiers.” Peter also praised MiTek’s 20/20 software and the way in which it has assisted the operation of the Owens business.

“Without 20/20 I don’t think we could have achieved what we did. We had one of our estimators/detailers in Warrnambool moved to being a site supervisor, which left us one person short.

“A lot of our work was being detailed at Warrnambool.

“Now about 95 per cent of our work is detailed at this end, turnover has also increased by around 30 per cent, and we haven’t added more people. I attribute that to 20/20 and the way its used, which lets us get through more work.

“The difference between pricing a job and detailing a job is the layout. When a quote becomes a job, the detailer spends about 15-20 minutes tidying up layouts if the plans haven’t changed.

“We’re not double handling things, everything is there!” An age of expansion and technology - and Owens are embracing the lot!